Used tyres make up a significant proportion of the waste produced from old vehicles and are scrapped once no longer safe to use on vehicles. we processes many thousands of used tyres every month using the latest Tyre Baling technology which allows previously useless tyres to be used in an ecologically and environmentally friendly manner. The Tyres are compressed using a specialised (PAS108 specification) Tyre Baler and then exported worldwide to various sites where they are used in the construction industry and other applications

As tyres cannot go to landfill, and incineration is undesirable, what else can be done?  Alternative ideas for re-using scrap tyres are increasing, but the number of outlets remains less than that which would meet potential demand.  Small numbers are used as boat fenders, playground equipment and by farmers.

Material recovery from tyres and other rubber products is increasing.  The main technique is to shred and reduce the rubber to crumb, and use this as a moulding material or filler.  Applications include brake linings, carpet underlay, equestrian, sports and safety surfaces, including playgrounds, as well as surfacing for roads, paths, and low grade use as landscape mulch or waste oil absorbent.  Finer grades of crumb are used in rubbers for vehicles.

Waste tyre recycling from £1 per tyre

Collections from £1.20 plus VAT per tyre 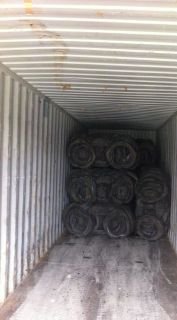 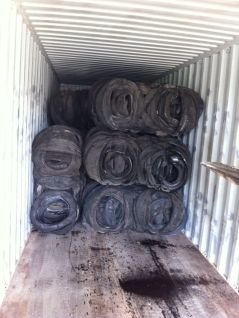 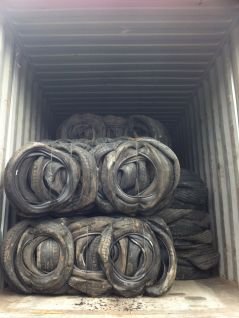